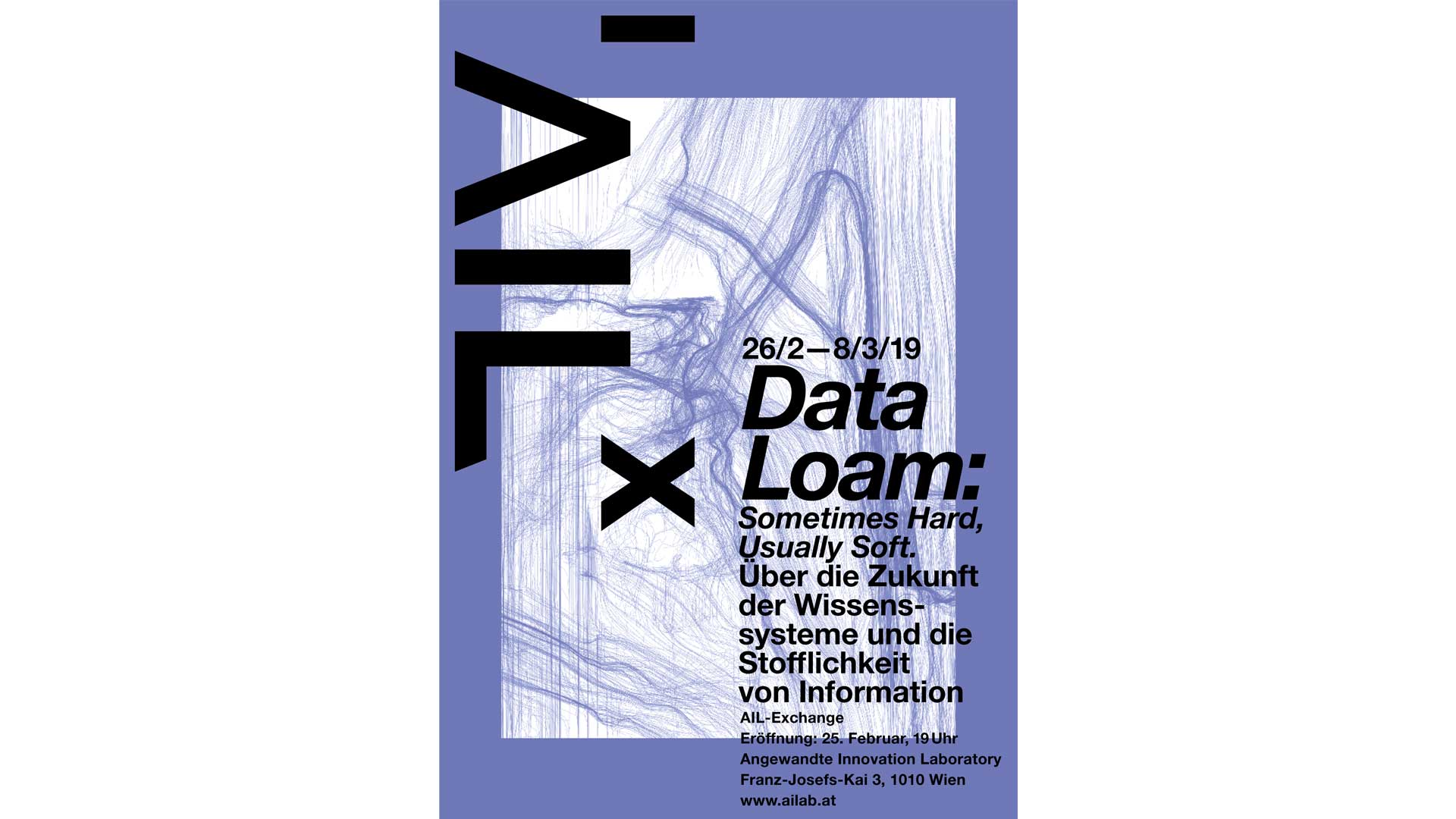 DATA LOAM and the future of knowledge systems

Although it is spread over almost 500 square meters, the central exhibit of the current show at the AIL in Vienna is not visible for the time being. “Data Loam” is the name of the project sponsored by the Austrian Science Fund (FWF), that is summarized and presented here. The very title that gives it its name is one of the idiosyncratic figures of thought that characterize this project and the accompanying exhibition. It can be deduced from the subtitle of the show that the future of knowledge systems is at stake; the English word “Loam“, on the other hand, means clay or clay – how does that work together?

Martin Reinhart, initiator of the project and co-curator of the exhibition, puts it this way: “Loam is a soft material and one of mankind’s oldest building materials. Fired clay, as a shard of clay / pottery, is one of the earliest cultural artefacts and almost indestructible. We were fascinated by this transformation of a plastic sediment into a concrete, tangible object because to us it seems a suitable symbol for the transition from data to knowledge. For several decades now, enormous quantities of digital data have been produced, piling up into a gigantic parallel world of pure information. But is that already knowledge? No, it is the raw material from which knowledge can be condensed. And we as artists are used both to playing with matter and to giving it content and form – so why shouldn’t we keep our hands off this data loam?

Of the almost thirty international artistic positions shown at the AIL, some refer specifically to the material of the exhibition title. Two short films from the turn of the century are shown with a twinkle in their eye, in which the clay forms itself without the intervention of the artist and as though by a magical power, giving the resulting sculptures a life of their own. In “Ten Types of Torture”, on the other hand, an installation by the young artist Laura Stoll, four unfired clay casts of her own face slowly dissolve under the constant effect of dripping water. By the end of the exhibition, that which composes identity will have transformed itself back into its amorphous source material. Whether this is – from a Western point of view – a torture or – from an Eastern point of view – a cyclical passing, and recurrence remains unanswered. Just like speculations about what trace each of us will leave behind in the ocean of data.

The question of the future of knowledge systems, that was posed at the beginning, proves to be multi-faceted in the other works as well. What is also surprising in view of the rather technical subject is the strong presence of comparatively traditional forms of expression such as painting, object art and graphics. In addition, there is a series of archival and everyday findings that appear alongside the artistic works. Along these works and work cycles, aspects are addressed that all have to do with the struggle for an order and allocation to the theme: What can be described, how can it be described and how does description change the essence of what is described?

In this context, the sphere of art appears both as a laboratory of ideas and as a litmus test for a dreamed-of future knowledge system that is supposed to function without the rigid structural order of libraries and databases. For what art produces is often contradictory, ambiguous or context-dependent and thus eludes predetermined categorizations. In which way must a collection of knowledge be structured so that it can absorb artistic expressions and also preserve and present the implicit
contents that have not yet become visible? After all, knowledge systems should not only be silent archives, but also put their content into living relation to one another. It is precisely these correlations which are rarely simple to determine in the field of art.

Two very different work cycles deal with the theme of variation, permutation and the change of the similar, which also form the spatial bracket of the exhibition on the upper floor. On the one hand, there is Florian Unterberg’s subtle lexical universe, in which letters become pictorial symbols, which in turn are transformed into objects. The result is an enchantingly beautiful variety of self-referential topographies and aphoristic portraits. Quite in contrast to Jimmy Zurek’s large-format panel paintings, which could perhaps best be described as visual rap music. Here, too, the boundary between language and image is dissolved, though not with subtle variations, but with fast rhythmic rhymes that tantalize the brain: coarse word jokes, pictograms and song lyrics mix in them into ever new, artistically arranged and pulsating clouds of meaning.

These examples may make it a little clearer what the researchers and artists of the “Data Loam” project mean when they postulate that the world cannot simply be broken down into tag clouds and ontologies. The human mind has no problem solving a rebus puzzle or understanding a pictorial joke. But a search engine like Google or the much-conjured “artificial intelligence” would be in dire need of it. So how can our ability to recognize similarities, associate and create meaning be transferred to machines?

Although other interesting positions can be found in the exhibition, it does not exhaust itself in philosophical questions, but equally illuminates and discusses political and technical aspects of the subject. For today it is no longer clear who governs knowledge and where the increasingly blurred boundaries between certainty and deception lie. Following one of its own premises, however, the “Data Loam” project does not draw the dystopian image of a future in which truth and manipulation have become indistinguishable, but explores concrete proposals for positive solutions. For one thing, it deals with questions of secure authorship and the traceability of information. The project partners of “RIAT – Institute for Future Cryptoeconomics” have researched on this topic for years. In connection with the “Data Loam” project, they examined whether and in what way blockchain technology could be used as a possible solution for the knowledge sphere. In the exhibition an entire room is dedicated to this topic.

Another part of the project dealt with the possibilities of developing non-hierarchical structuring systems with the help of algorithms. The novel approach here is, that data is not divided into existing categories, but that these categories search for their optimal location in a multidimensional knowledge matrix and knowledge organizes itself in this way. This process of automatic correlation is conceived as dynamic – that is, each new piece of information changes the order of the previous system and the distances between the individual data are recalculated. In this way it is possible to map complex meanings and to free oneself from the constraints of existing hierarchies. The interesting thing about this is, that the mathematical basis for this self-organization is partly based on the physical behavior of matter. As a prototype this already works, and one can watch how the particles of such a knowledge system form in numerous iterations in optimum order.

With regard to the central exhibit mentioned at the beginning: it requires some capacity for abstraction to recognize it, since it is the exhibition itself. It is only slowly that visitors begin to understand that the small displays that are attached instead of the usual object labels and hall texts are constantly changing their content. They describe the connections between the works of art in one way or another, they provide additional information and explanations, but one can never be sure which reality they correspond to. It is a subtle insecurity with a great effect, because it is through them that the exhibition makers
renounce their curatorial sovereignty, letting both artworks and visitors reclaim their own space. There is simply not the one path through the stories and ideas, but instead many equal configurations.

Each work appears like a prism in which meanings can break differently – depending on the angle you look at it. And ultimately, this spectral approach is the hope for the future knowledge system of the future to which the research of the “Data Loam” project is dedicated. It should lead, but not patronize and order, without creating hierarchies.