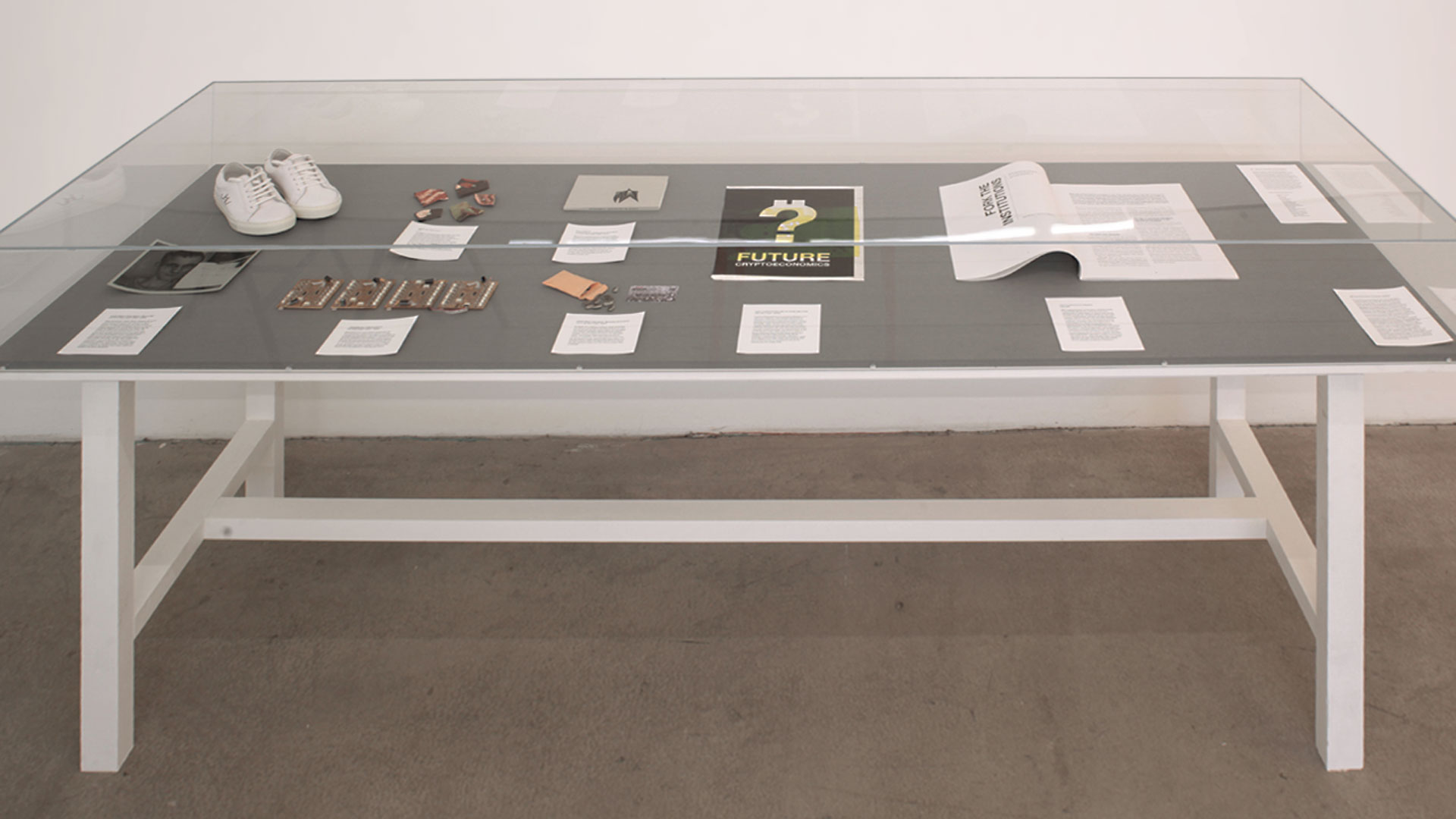 the dynamic accumulation of data and its pervasive presence poses new challenges and opportunities for society. this ‘big data’ era of machine learning and neural-networks often prematurely supposes that histories can be computationally observed through the aggregation of amassed data. it is important that the historical records of distributed and network based cultures do not solely rely on the scraping of corporate databases such as google or reddit. this accelerated era of network cultures therefore requires a careful and active archiving practice. RIAT seeks to accomplish this by unraveling the immaterial and often elusive communities of the cryptosphere through an engaged participatory research and practice, accompanied by careful processes of documentation. in doing this, RIAT seeks to deepen its own quantitative research data – both collecting and formulating performative process-artefacts in order to further inform RIAT’s ongoing investigation of the cryptosphere. the artefacts collected by RIAT represent knowledge-value and are making cypher-culture readable. the archive exists since 2004 and consists of crypto-art from international artists, collectives and anonymous entities. elements have been shown internationally and are continuously integrated into the archive. 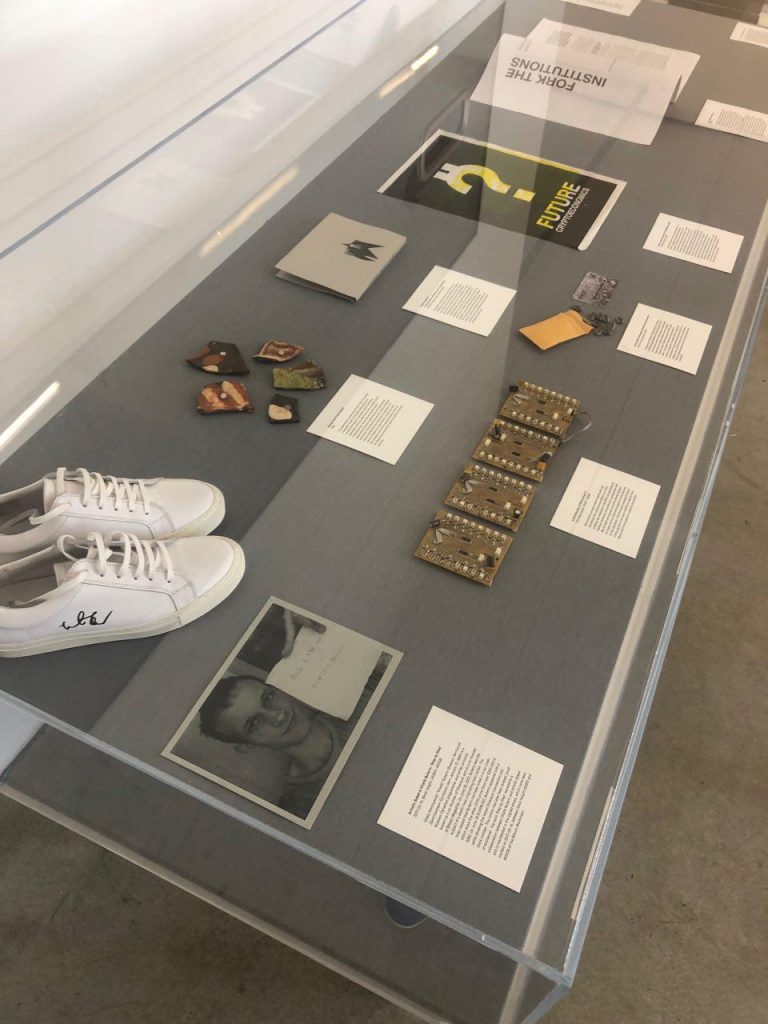 the artefacts on display at the data loam exhibition. photo by RIAT

bitcoincloud is an early artwork dealing with and thematising the cryptocurrency bitcoin. an initial prototype was developed in late 2010, conceptualised by matthias tarasiewicz and produced in collaboration with max gurresch and engineer and artist damian stewart. on display are the initial switchboards to drive modified led-fans. the initial work consisted of bitcoin mining rigs which have been modified in order to mine bitcoin only if the audience is watching the artwork.

on display are ‘ai weiwei sunflower seeds’ purchased with bitcoins generated by the bitcoincloud from 2011. the transaction between artistic bokeh and spacebank stays active in the bitcoin blockchain and is publicly viewable. initially, ai weiwei produced over 100 million seeds – the porcelain items were hand-painted by artisans in jingdezhen. the seeds gained in value after the tate modern bought approximately eight million. in a sotheby’s auction (2011) the seeds sold for £3.50 apiece. the here displayed seeds have the initial purchase value of 6.83 btc.

vitaly dmitriyevich “vitalik” buterin (russian: виталий дмитриевич бутерин; born january 31, 1994) is a russian-canadian programmer and writer primarily known as a co-founder of ethereum and as a co-founder of bitcoin magazine. on june 25, 2017, buterin was the subject of a death hoax originating from 4chan. the hoax stated that buterin had been killed in a car crash, which drove the ether (eth) price from over $300 usd to $260. on june 26 8:01pm est, buterin appeared with a selfie showing the latest ethereum transaction and block number. this action has later been dubbed ‘proof of existence’. the work ‘step by step’ represents a collaboration between vitalik buterin and artistic bokeh and is manifested in signed sneakers, which have been marked on 2017-02-14, between block height 452931 and 453239 of the bitcoin blockchain.

the booklet ‘cryptoeconomics: infrastructures and artefacts’ has been printed by the RIAT open publishing lab. it serves as a lab notebook and contains research about informal crypto communities and experimental interdisciplinary practices with the blockchain. it further combined positions and perspectives of interdisciplinary cryptoeconomic research and contains essays of the works ‘proof of presence’, ‘bitcoincloud’ and ‘terra0’. the publication has been distributed during forum alpbach 2017, the ars electronica 2017 and the ‘grey area festival’ in san francisco (2018). the publication has only been given out to individuals and has not been circulated in another form.

future cryptoeconomics is an unusual publication: it is a hybrid of a magazine, a lab notebook obfuscated as newspaper. it has been printed with rotational print technique and serves as experimental system: “artistic technology” where different forms of inquiry collide. in ‘the genesis stack’, the first and initial prints of the magazine (which have been held back from circulation) have been inscribed in the chain of the ethereum world computer via nft technology. the ‘genesis issue’ as well as the ‘genesis stack’ (1200 copies) are on display in museumsquartier vienna (artistic bokeh space) as a satellite of the data loam exhibition. during the exhibition at angewandte innovation laboratory, copies of the magazine are made unique with a drawing robot and a smart contract on the ethereum blockchain, starting with the number #1201.

with ‘cryptoeconomics’ we are facing a discipline which is not formally defined yet. it reminds of the early developments of game theory, an area of study that at the beginning was very narrowly defined, but then grew to be an interdisciplinary field that included the social sciences, political sciences, and many other disciplines. in order to discuss the future developments of world computers, immutable code and cryptocurrency, we must broaden our viewpoints and make sure to understand the full scope of possibilities of true decentralisation. we have to be aware that this possibly also means a “constant destruction and recreation of institutions and experimental cultures”, to make space for invention and new disruptions. the first issue of future cryptoeconomics contains research interviews with vitalik buterin, josh stark, andreas antonopoulos, josh stark and jan hubik (paralelni polis). the essays featured have been written by jaya klara brekke, shintaro miyazaki and matthias tarasiewicz.

the experimental performance ‘proof of burn’ has been undertaken as part of the data loam project and included the research and design about 3 different speculative timelines which have been compiled into an interactive show, where the participants would experience information asymmetries and experimental economics. the performance has been shown at reaktor vienna and has been live-streamed on television. the items on display are mixed ‘shards’, which have been the monetary unit of the interactive setting. some of the shards are counterfeit in order to crash the fictional economy.